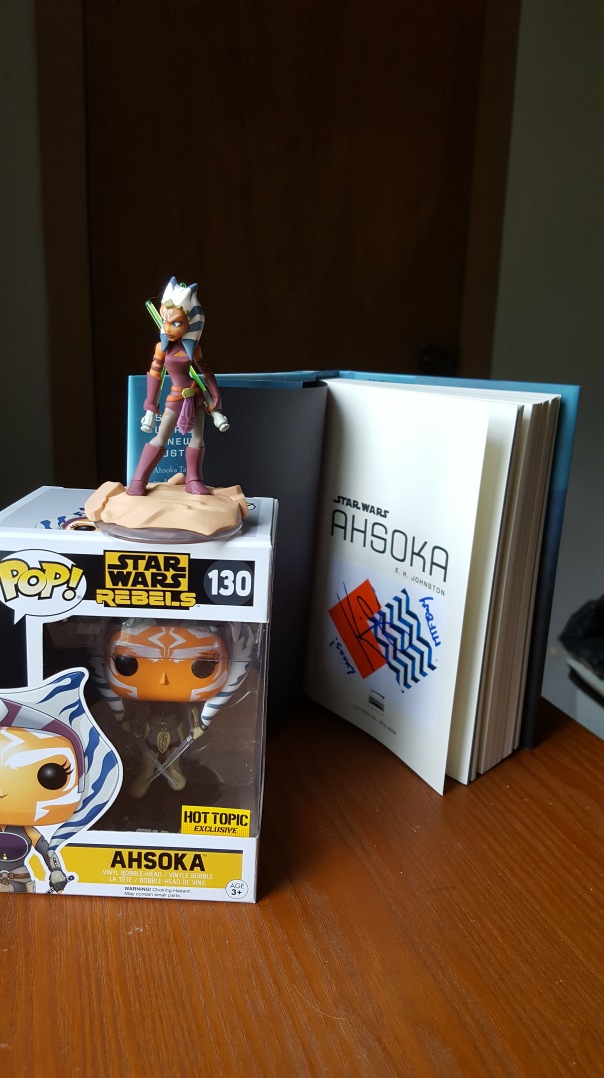 I haven’t kept it a secret that Ahsoka Tano is my favorite character from the Star Wars universe going from annoying token kid character inserted into Clone Wars to appeal to kids, to broken hero, to rebel alliance merger, and beyond. I was excited to discover that my favorite character would be getting her own YA novel this year and was ecstatic to discover I’d have the opportunity to meet the author at Texas Teen Book Festival earlier this month.

I made E.K. Johnston fangirl over a drawing I did of Ahsoka Tano that day and in a complete surprise of kindness she gave me a custom name tag and signed it to me for when I purchased my own copy of the Ahsoka YA book (we both went into bigger fan mode when she told me Ashley Eckstein would be joining her on tour with book signings for the Ahsoka book).

Spoilers from this point on, no I can’t Jedi Mind trick these out of your head.

Ahsoka takes place exactly one year after the events of Order 66 and Empire Day with Ahsoka laying low and trying to live her life as a civilian as opposed to a soldier or Jedi she once was. The aftershock from the betrayal of her friend Barriss Offee still close to Ahsoka’s heart despite Ahsoka participation in the the liberation of Mandalore (for more info on that click here).

The book focuses on Ahsoka’s attempts at helping people fight the empire while addressing her own mixed feelings about being a child soldier in the Clone Wars and having the knowledge that nearly all of her loved ones are dead.

Ahsoka spends a good portion of the book trying to put an end to the military mindset she had during the Clone Wars and trying to remember what was taught to her before the war started. I thought this was an interesting approach brought up in the book since it was a conversation Ahsoka and Barriss had in the early days of the war where Ahsoka wasn’t sure what her life would be like post war and Barriss was under the impression the Jedi would return to a life of peace and meditation.

The book also shows just how Ahsoka got her position as Fulcrum in the rebellion and where she got her white lightsabers. I won’t spoil where she found the kyber crystals and what led to their creation, but I feel it’s very fitting for this portion of Ahsoka’s character arc and life. I was also very pleased to see the topic of Barriss Offee addressed and that it didn’t take up the entire book. It was a topic that I had wondered about for a while and glad to see how Ahsoka recovered from it and became stronger because of the events that caused her to leave the Jedi order.

I think many fans of Ahsoka Tano and Star Wars will enjoy this book very much, E.K. Johnston did a great job of tying the bridge between the Clone Wars tv series and the current Star Wars Rebels series and did justice to such a beloved character.

I give Ahsoka by E.K. Johnston five white lightsabers out of five.

Spoilers for the season 2 finale of Star Wars Rebels Starting right from the begging!

The season two finale to Star Wars Rebels ended in stark contrast to the season one finale; this is not shocking since prior to the events of A New Hope the rebel alliance had been struggling so happy endings in this series wouldn’t (and shouldn’t) be expected even if it is owned and produced by Disney. Don’t believe me? Go watch season one of Star Wars Rebels and tell me this is sunshine and rainbows after Rise of the Old Masters.

Things are different in this season two finale, unlike season one where the Ghost crew successfully rescued their leader Kanen from the empire and Ahsoka Tano is revealed to be alive and a head figure to fully unite the rebel cells into a Rebel alliance. Let’s stop and think about the word united and how important it is to the Star Wars world and Rebels.

Here are shots from the two season finales; in season one we have the Ghost crew smiling happily after the events of the season. In season two they are separate and recovering from the aftershocks of the events on Malachor. Here’s the biggest deal from the season finale that many people are overlooking. Ezra’s lightsaber has been destroyed by Vader.

Some people are thinking ‘big deal it looked like an ugly, clunky staple gun anyways,’ and yes it is a big deal in the show than more people realize. First the kyber crystal in that lightsaber was shown to Ezra by the Force on a Jedi temple on Lothal and let’s be honest with ourselves kyber crystals are hard to find in this universe at this time. Second Ezra’s lightsaber is more significant beyond Jedi weapon or toy for kids and fans to buy. Ezra’s lightsaber was made from something each of his friends gave him; from his mentor Kanen, the woman who opened his eyes to the good that the rebels do Hera, the Lesat who taught him the value of life Zeb, the pretty badass girl he had a crush on Sabine, and the selfish droid who gave up power cells for that lightsaber Chopper.

It makes this final shot of Ezra holding a Sith holocron even more saddening. Ezra is alone separated from those important to him. Even more saddening is that Ezra activates this holocron showing that he is tapping deeper into the dark side of the force.

We will have to wait and see what will happen to the rebels after these events and how the Rebel Alliance will continue without the guidance of Ahsoka Tano and what will become of Ezra and Kanen to see if they will survive the series (if Disney is ok with them being killed off or worse.)

Let’s try something a little different, I’m going to talk about an animated character I’ve recently found to be pretty interesting, and yes it’s because an important matter that needed to be addressed concerning her existence will finally be addressed; I’m talking about the fate of Ahsoka Tano.

Before I continue I will say I’m sorry to Star Wars fans, I’m going based off the new canon, yes I know you all still aren’t happy about your entire expanded universe being set on fire, I understand it’s not easy to overcome. Please don’t get pissy on this blog, there are other parts of the internet for you to express your anger and grief over with other fans with the same feelings.

When the world was first introduced to Ahsoka Tano, she didn’t have too many fans, it’s not hard to see why. She was introduced in a Star Wars movie that probably should have been a tv special than theatrical release and she was obviously the mandatory kid character for the kids watching The Clone Wars to relate to. Oh and she was Anakin Skywalker’s padawan.

When I first saw Ahsoka my thoughts were ‘when this series ends…it’s not going to be pleasant for her.’ There were many possibilities to her fate; she was killed offscreen during the events of Revenge of the Sith, or she died at some point late in the clone wars helping in the fall of Anakin Skywalker to the darkside.

By season five we were all pleasantly surprised by the character, yes she was the typical token kid and had typical token kid episodes, but she got better as the series went on. She did missions on her own, held her own in a fight, was reckless and sensable as a jedi and saved the day her fair share of times.

Then came the season five finale; Ahsoka was framed by her friend Barriss Offee for a terrorist attack and was being held on trial. It was then that Ahsoka truly grew up, through this trial she discovered she had more in common with the bounty hunter Asajj Ventress than she believed and through Bariss’ betrayal and confession questioned the jedi order and through many realizations left the order.

For three years no news came from the character, until March 2nd 2015 where Ahsoka’s importance to the Star Wars universe was revealed. Up until four years before the events of A New Hope the rebels had been functioning through multiple cells with only one member of each rebel cell being given need to know information so that incase one member of the crew was caught, no rebel secrets would be lost.

Until the Ghost crew performed a rescue mission for one of it’s members. It was then the mysterious Fulcrum made a decision to change rebel cell protocal and unite all the cells as a full rebellion and the identity of Fulcrim was revealed to be Ahsoka Tano. That’s right, the kid created to appeal to younger characters became the woman who had united the rebels against the Empire.

Throughout season 2 of Rebels Ahsoka has been keeping an eye on bigger events trying to piece things together and find the fate of Anakin. Things have been hard on her and many fans are convinced she will be killed in her fight against Darth Vader at the end of the season. Some new revelations have been presented though; what if Ahsoka hadn’t left the jedi order? Could she have reasoned with Anakin and the Jedi masters to not punish Anakin for his secret life with Padme? Could she have kept Anakin on the light side and prevented the horrors that would have happened at Revenge of the Sith?

It’s all so interesting to see how someone so minor became so important. I’m convinced she will not live past the events of Rebels season 2, but we’ll wait and see.