Apologies, for some reason my post deleted itself, here is the review for The Lunar Chronicles Cress. Damn this is so annoying that I lost three paragraphs of writing.

I liked Cress ALOT! This made up for Scarlet so much, the pacing was so much better and it was so much nicer to not be jumping back and fourth between Cinder and the primary protagonist of the book. I mean it does happen, but it’s not as bad as it happened with Scarlet.

Spoilers from this point on, please do not read if you don’t want to be spoiled.

At the end of Cinder we are introduced to the character Cress that I couldn’t help but label a fangirl despite her barely having any screen time. As of this book I can confirm that Cress is a fangirl. A shockingly realistic one too. I’m thinking Merissa Meyer may have gotten inspiration from the fact that most fans of anime or television in general are aware of torrent sites and with the few clicks of a mouse and clicking of a keyboard can get media through torrent sites to flesh out Cress’ character more. Cress is a computer genius who can hack satellites and has been making Lunar spaceships invisible to Earth nations for seven years with her computer abilities all alone on a satellite.

However she does get bored and due to Lunar’s not caring for recorded work she settles for Earth media and grows to love it and becomes a fangirl of Earth and humans. She is a shell so she doesn’t have any glamor abilities and isn’t affected by them. I gotta say I really do like her as she felt more relatable to me. Despite having a Y chromosome and not necessarily being a fangirl (yes even men have inner fangirl moments), I was able to sympathise more with her concerning her living situations. Sadly with no combat abilities Cress is more of a damsel in comparison to Scarlet and Cinder who have some minor combat abilities.

I can also feel that Cress really is a fangirl since like most people in fandoms she researches her favorite characters (in this case Thorne) and has daydreams about falling in love with them. She’s actually adorkable.

Alot more is also explained concerning the backstory of the world Cinder takes place in; the discrimination towards cyborgs is explained, ironically I was nearly spot on about people discriminating against cyborgs for the sake of having something to discriminate against something.

We also get character development from all the characters with CInder realizing that she has no choice but to start a revolution against queen Levena, Dr.Erland’s backstory fully revealed and his regret at sacrificing so many lives, Iko getting her own humanoid body (my favorite part), and Thorne proving to himself and everyone else that he is more than a freeloading perverted thief based on the feelings Cress has for him.

The book does end on a cliffhanger (again), but with a war finally starting between Earth and Luna and with two books coming out next year (one a prequel about Queen Levena and the final book based upon Snow White) the series is definitely going to have a dramatic ending.

Also it appears that with the addition of a Snow White character Merissa Meyer has indeed created her own Sailor Senshi team. I give the book four out of five starts. 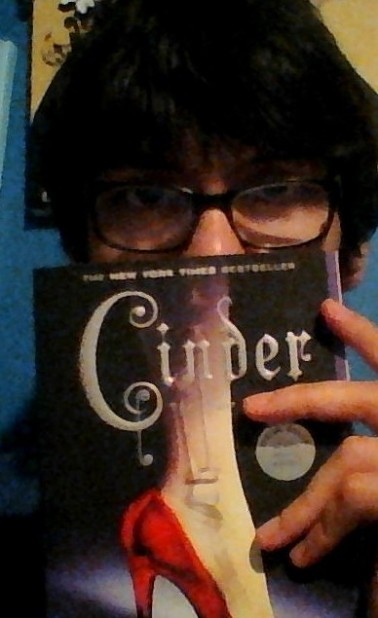 Here is the first official blog concerning my thoughts on books/entertainment. What better way to do this than with the Young Adult genre (nevermind that I’m in my mid twenties…) I discovered the book via the webshow Booze Your Own Adventure (formally 50 Shades of Green), at first I was reluctant to read along with our two lovely hostesses because the Spring Semester for classes had just started, but after a while I gave in.

Despite the size of the hardcopy book itself Cinder is a pretty fast read. The actual story is a retelling of Cinderella, with a twist to actually make the book readable. Cinder is a cyborg, the scum of society because society needs discrimination one way or another, she’s also a mechanic and earns the money for her household of the typical wicked stepmother and stepsisters, one stepsister nice and the other following in her mother’s footsteps.

For the first two thirds of the book the story loosely follows the usual Cinderella story, unlike the majority of Cinder’s counterparts the ball and Prince charming/Prince Kai aren’t the highest priorities for her. Her highest priority is her own freedom from her stepmother and the health of her stepsister Poeme who has been infected with a deadly virus that Cinder is immune to.

At this point I will warn that there will be spoilers, please do not read on if you hate them or intend on reading the books.

One of the different things between Cinder and it’s Cinderella counterparts is that aside from being set in the future is that there is political friction between the earth alliance and the moon government. Lunars are humans that have evolved to ‘glamor’ not only themselves, but the naked eye of regular people. The moon queen desires to rule both the moon and the earth by any means necessary. She desires to pull this off by marrying prince Kai and killing him and the only person who can stop her is the long lost moon princess.

Does this story sound familiar to you? Well if you grew up in the nineties it should because it’s the plot for the first arc of Sailor Moon, and just like the first arc of Sailor Moon it’s pretty obvious who the moon princess is if you’re older than the target age group. In fact that’s the only flaw I could find in Cinder was that it was predictable. Not in a bad way like most ‘Twilight clones’ are where ‘muggle meets X and has their world turned upside down and discovers an amazing life’. But predictable in sense that you know that Cinder is the moon princess, the emperor of China will die, Kai will have to take over and the Lunar queen is evil for the hell of it. It’s also predictable who will die and that Cinder has to go to the ball.

There are a few flaws in the story aside from the predictability. Mainly my questions of why are the Lunar’s so evil? What happened that there is harsh feelings between the earth alliance and the moon kingdom? Why is the royal family of the moon kingdom so blood thirsty? How did Lunar’s gain the ability to glamor? (sorry Marissa Meyer, evolution doesn’t work like that).

The Pro’s outweigh the cons though. Do you wonder why this story sounds alot like Sailor Moon? Well here’s the reason, Marissa Meyer, author of The Lunar Chronicles is a Sailor Moon fan and wrote Sailor Moon fanfiction. And unlike most people these days who wrote fanfiction and eventually got their work published (some of them partially cheating and self publishing (THAT MEANS YOU E.L. JAMES!)) Meyer produced very GOOD fanfiction. She took two stories, one known to nearly every person around the world and the other known to all who watch anime and read manga and she created her own original story out of it.